Chain Attack:
No special mechanics like CoC or Grymkin - 'classic' Warmachine faction
The faction feels like an army of Gormans or Hutchuks (multiple options that you can choose from for a given situation), layering multiple buffs/debuffs to achieve big results (described as adding ingredients to brew a potion) - an ARM swing of 8 was mentioned at one point, although the native stats are lower to compensate for this
Lots of immunity to fire and corrosion, as well as gas effects
Dragon's Breath Rocket - described as one of the key support pieces of the army (card spoiled here)
Combat Alchemists - 3 man unit, FA 3, described as a unit of non-character Gormans. 3 grenade types: AoE Ice Cage, Blood of UrCaen (magical damage, critical removes upkeep spells/animi), unnamed 3rd type
Heavy infantry are mentioned, no description other than that they exist
Rocketeers are going to be spoiled on Crippled System (on the 4th), described as mobile skirmishing infantry with grenades, can apparently take an army mostly consisting of them
Railless Interceptor (BE) - strongly hinted that there are multiple types, Pagani was mentioned to play a list with 8-11 models consisting mostly of BE
2 theme forces at release - one can give free DBR crews, the other the DBR crews count towards free points

Crippled Systems:
3 heavies. Suppressor, shown on stream. Vindicator: like Reckoner but with attack types including new Poison-style effect that does bonus die of damage against constructs and undead. Toro is a cheap beater.
3 lights, one of them is Vanguard.
Colossal.
Oil exists in faction (bonus die for fire damage). Rust changes to all constructs, not just warjacks.
Crucible Guard are Llaelese and Ordic, expect some mercenaries but not a ton. Gorman and Hutchuck in for sure.
Five warcasters. "Are we forgetting somebody? We might be forgetting somebody...". There's a battle engine-specific 'caster. Warcaster roster described as "Super Gorman", "Boom Boom", "Juice It Up", "Rumble Rumble", and "End of Aliens". Three male, two female. In general, 'casters have buffs and units have debuffs.
No details on Battle Engines but there are multiple of them. Described as large / hefty, but squat. "Siege Crawler without legs"? Models aren't final yet so they weren't really sure.
Tons of shot types and "menus".
"There's something in the faction that has Partisan but not the way you expect." Sounds like some CG model will Partisan into another faction.
Fluff on Prospero (robot model shown off before): he's an actual wet brain in a jar installed into a robot chassis, not like Convergence at all. 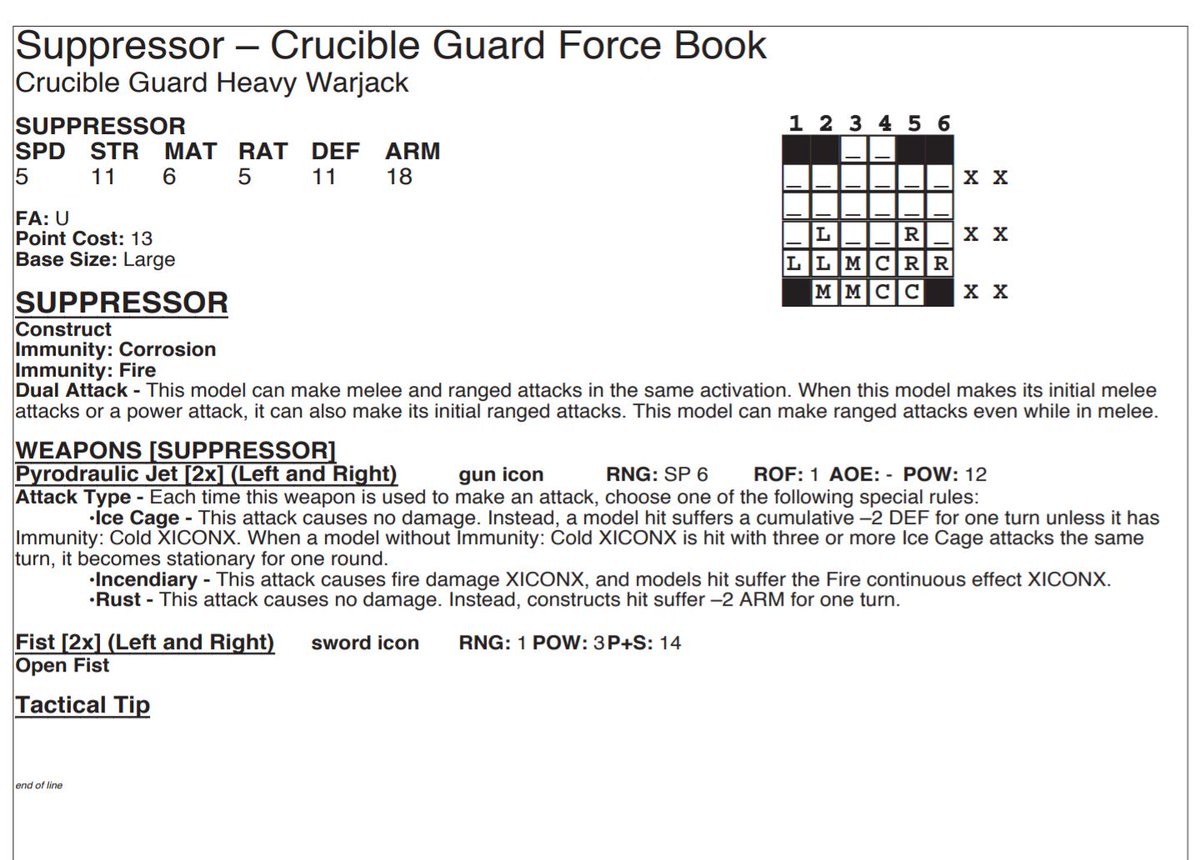 “I need you to be clever, Bean. I need you to think of solutions to problems we haven't seen yet. I want you to try things that no one has ever tried because they're absolutely stupid.”
Top

They didn't say there was a colossal. They were being coy and said it could be some kind lesser, colossal or something.

The weapons that the rocketeers have are gravity bombs which means they probably aren't thrown like grenades.

The battle engine caster doesn't mean it's a battle engine, it could be that he just runs them well. That's how I took it to mean.
Top

Thanks for that... I was just compiling stuff from Reddit so some stuff maybe a bit off.
“I need you to be clever, Bean. I need you to think of solutions to problems we haven't seen yet. I want you to try things that no one has ever tried because they're absolutely stupid.”
Top

Great post, Byron. It's cool to have all that in one place. I'm very interested to find out what those Railless Interceptors really are. Any fresh info on that?
Top

I think those are the battle engines. Everything is in Cid.privateerpress.com now, so posting here is probably gonna stop for a bit.
“I need you to be clever, Bean. I need you to think of solutions to problems we haven't seen yet. I want you to try things that no one has ever tried because they're absolutely stupid.”
Top
Post Reply
5 posts • Page 1 of 1